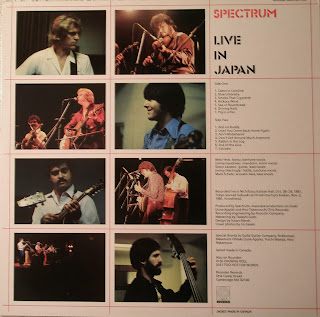 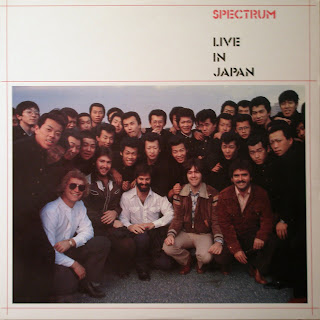 It was so good to finally rip that last post of Spectrum's "Opening Roll" that I had to do the same with my other Spectrum LP, "Live In Japan" from 1981. I had forgotten what a strong album this also is, more of a balanced album with stronger tunes overall I think, although none can match "Red Rubber Ball" from "Opening Roll" in my opinion. I have always been partial to the song, "Sea Of Heartbreak", and Spectrum's version here is no exception, but I also enjoy the gentle "Blue Umbrella", a powerful "Cabin In Caroline", the beautiful "Hickory Wind", the tear jerking "Until You Come Back..." and a really fun instrumental encore in "Sukiyaki". But it's all very good stuff and features a little more of that cowboy jazz side of the bluegrass world with fine vocals and instrumental work on the likes of "Ain't Misbehavin'" and "Don't Get Around Much Anymore". Since it is a live recording that seems (actually it does stitch together several dates and a couple locations) to capture continuous coverage of the actual concert performances in Japan, with plenty of fan appreciation, I decided to rip each track exactly as it appears on the record, no space between each song, every second of applause. I also created a separate track of the introductions which runs between "Blue Umbrella" and "Smoke That Cigarette". So you'll find 15 tracks even though only seven songs per side are listed on the album cover and labels. I need to find the other work these guys put out, but I believe that "It's Too Hot For Words", with Mike Auldridge, is the only other LP they released before going their separate ways with all that talent. Hope you enjoy this second Spectrum goodie...

Thanks for this! I've been looking for this album for years. I bought the other two (vinyl) at their only gig in Denmark in the eighties. They were absolutely the best band I heard around this time.
(I'm still looking for Tasty Licks)

Glad you enjoyed the post. I would love to get a copy of that third album with Auldridge if you should ever decide to do some posting of your own! As for Tasty Licks, I do have their first album (self-titled) so I'll see about posting that, assuming it's OOP at this point. Can't say I've seen it any time recently.

I'd like to help you with the third Spectrum album. I have ripped it from vinyl, but I don't have a blog, and I don't know if there's a way to post it on yours?
So the only way I can think of, would be if you can download from "Demonoid" or "What-CD"
If you can, I can post it there for you - unless you have other suggestions.

Thanks for the offer, that would be great if you were able to upload it somewhere. I'm not familiar with "Demonoid" or "What-CD". Is there any reason you couldn't just use a free service membership to post it temporarily? I pay for a Rapidshare account (cost is very reasonable) but I also have some of my postings done through MediaFire using a free account. www.mediafire.com. Have you checked that out? I haven't had any problem with either service.

Spectrum - again. I haven't tried posting this way before, but I will give it a try. I'll let you know - and give you the link - when I have succeded. Probably in a couple of days.

"Too Hot For Words" should now be at:

Got it and it worked fine! Just listened to the first track. Thanks so much for the extra effort. It's exciting to finally hear this other album by this great group. Thanks again!