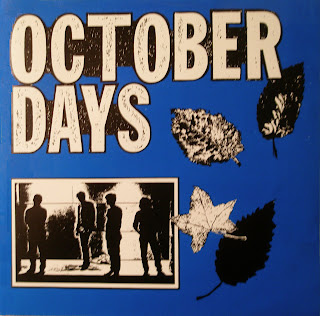 Next on the Connecticut late 70's early 80's local scene hit parade is a great 45 from a band called October Days. I believe I saw these guys at Brothers in West Haven once and they were very enjoyable as I recall. This recording is quite representative of the cool vibes of the music that this whole scene thrived on. A bit dark, a bit rockin', sort of moody but catchy at the same time. I like both cuts and wonder where these guys ever went, if anywh 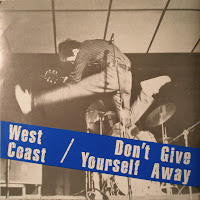 ere. The cover and insert material includes only what you see in the above pics and a fold out collage that includes some lyrics, but nowhere does it give any information on the band unfortunately. Both songs are credited to B. Nelson so I'll assume he is probably the guitarist/singer here (looks like quite the leaper in his day!). The recording was apparently from New Haven so I'm pretty sure they were from Connecticut and I saw them here, so there ya go...enjoy!

(side 2)
Don't Give Yourself Away

Songs credited to Blake Nelson
Posted by Durge & The Oldies at 11:21 PM

Thanks for the October Days... they were definetly a favorite around NH in those days. Does anyone have either of the EP's?

Your welcome Charlie. Great to see someone enjoying it. I'm surprised how little interest there's been in these old Connecticut bands. Unfortunately I don't have any of the October Days EP's but I'm pretty sure a good friend of mine does, so I'm hoping he might eventually agree to share it with us...stay posted!

I use to go see these guys when I was in high school in Hartford. I have the single and the 7" EP with "Hardwood Floor". They were amazing.

I discovered this band lately and think they are/were awesome. Like to learn more about them.

October Days came out of Wesleyan University in Middletown, CT in the early 80's. I don't think they were all Wesleyan students, but lead singer and guitarist certainly was. He is now a successful writer of teenage fiction such as PARANOID PARK.

I was a DJ at WNHU 88.7 in the mid 80's. That west coast single was amazing. Of all the schmaltz that came out of NH these guys should have more recognition. I obtained the EP "Do the Right Thing" several years ago. Whoever these guys were, they were about the music and nothing else. I'm about to spin it on my turntable

hardwood floor was an awesome song .i saw them several times at the Grotto in new haven

The Grotto had some terrific bands there for a couple years, I believe in West Haven actually. Saw David Thomas do a bazaar set there one night among many other great local and nationally known bands at that time. Always a bit overcrowded but that was a common theme between that, Ron's place and some other little hot spots. I can't recall where it was that I saw October Days, I think it was Ron's Place or The Joint, but it was an infectious sound.

Cool band, got a kind of Squirrel Bait post-punk edge. "West Coast" has a real Agent Orange feel, though I think it pre-dates the Living in Darkness LP by a few months.

I took over a record collection of a friend of mine and the mini-LP 'Do The Right Thing' was one of the records. I'm 61 years now and turn this one often, such a fine record! Believe it or not, i'm also turn Frank Sinatra now and then, haha.

Variety is always the spice of life, music is best when you have a full appreciation of the possibilities. Hope you enjoy that record collection!