Good bands are getting Furor and farther between... 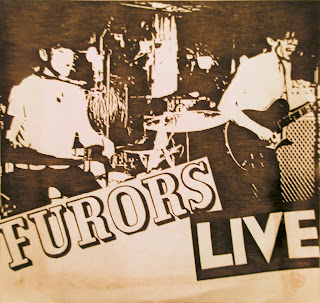 From bluegrass in Japan to The Furors in New Haven, Connecticut. Now for some real fun! I have a very modest collection of 45's including a handful of some recordings made by local bands that were generally part of that late punk/early new wave phenomenon of the late 70's and early 80's. Being, at the time, a recent college graduate with a few bucks to spend on a regular basis, I was lucky enough to make regular trips to the hot spots for this music that were dotting the Connecticut landscape at that time. Places like Brothers in West Haven and the Lithuanian Club in Hartford were among the best clubs to see some down and dirty, raw music. Sometimes you would catch someone of more far reaching fame within the same genre, but most often you would see small, home grown bands trying to make their mark somewhere, and often enough it was pretty special. Although there certainly were some trademark attributes common to many of these enthusiastic fledglings, quite often it was somewhat "no holds barred" with some wild results. Good or bad or in between, it was definitely entertaining. Generally speaking, being tight and rehearsed was not the critical requirement. Energy and good music was all that mattered, usually loud and passionate. Of all the places that my friends and I would frequent during those days, I would have to say the most legendary and earliest among my memories is Ron's Place in New Haven. This might have been one of the first, if not the first, such place I visited. It was small, dark and dirty. The beer was cold, the bathroom typically flooded in urine, cockroaches roaming freely on the tiny bar, floors, etc. The jukebox was loaded with good stuff, classic rock and garage rock/punk/new wave. The dance floor was pretty small too, but managed to vaguely contain some pretty large groups of colliding bodies and aimless soloists who would flail under the hypnotic effects of the music. I remember one night where a bunch of us gathered (mostly strangers to each other) on the sidewalk just outside the front entrance, after closing, and we somehow slipped into a lengthy doo wop outburst that sounded pretty good (or so I thought at the time) until New Haven's finest stopped by to remind us that we were disturbing the peace. But that was sort of what Ron's Place was all about, disturbing the peace, in a harmless and fun sort of way. Why do places like that cease to have a purpose, why don't they just keep attracting throngs from generation to generation? Probably it was due to the public health risk, that I would believe. The core of our group of music hounds would often invite along various unsuspecting and uninitiated friends to enjoy a night at Ron's, but some were pretty uncomfortable with both the environment and the music. We tried. Anyway, to get to the point, I would like to post a few of these great 45's representing some of the talent that we witnessed in places like Ron's when the whole "scene" was really catching momentum and gaining attention from more fans. Kids were exhibiting some of the fashion of the English movement spurred by the likes of The Jam and The Clash, etc. The piercings and extreme hair, the leather jackets, The Ramones and this was just about the time that these artists were making some money selling records in the US. So it was a fun time, arguably not the very start of it, but it was coming of age as the New Wave evolved amongst bigger, glitzier venues. So with my description of Ron's Place still fresh in mind, let's start this off with a 45 rpm effort from a band called The Furors. I am no expert on any of these bands but the record references two names, Holcomb and Dans, and I believe this group was a local duo (guitar and drums with vocals). There are four songs here and I have to say most of it is quite loose and perhaps a bit funny. But I seriously love the tune "A Look For The Honey". I detect a bit of "Monochrome Set" in these guys, just not so polished. I really can't get the "honey" song out of my head. This seems the best place to start because, although not noted on any of the information on the label or cover, scratched mysteriously on the inner ring of the vinyl it says, "Ron's Place"! I have to assume, since this is obviously a live recording, that it took place at the venerable institution. Have a listen, it's historic...trust me...

(side 1)
Her Other Man
A Look For The Honey

(side 2)
Letters
I Couldn't Pretend