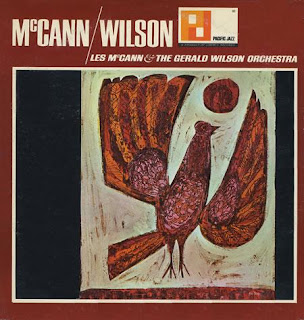 Yes, Les is once again, magnificent on this OOP recording from 1964. As can often be the case with Les McCann, his music and delivery can sneak up on you or appear far too comfortable/easy to make a quick impression. But once you've paid a little attention and think a bit beyond your head boppin', toe tappin', smilin' self, you realize that this guy is just so much fun and so sensitive to the emotions of music. Through his  piano and his voice (though he does no singing on this album) he connects as only the truest of soulful musicians can do. Since the album details, including the entire liner notes from the back cover, were available on line, I've included all the details below and I probably don't need to say much else here. But I will add a few thoughts on this generally scarce LP. Side one opens with a compelling "Could Be" that delivers a variety of moods nicely while "Stragler" & "Restin' In Jail" lead smoothly into an inspiring exercise to end the side with "Bailor the Wailer". This track impresses with Les' agile keyboard work and playful feel. Side two starts off with a tender tune, "Maleah", which includes a nice acoustic guitar solo/interlude from Dennis Budimir. Dennis is otherwise generally in the background on the album, to my disappointment, put this is his showcase for the date and you can hear him pop up momentarily here and there on a few other cuts. "Lot of Living To Do" is a Broadway tune (Bye Bye Birdie) which Les really puts his stamp on nicely, delivering a spirited bit of fun along with the album's only drum solo, a crisp complement to McCann's piano work, crafted by the accomplished Paul Humphrey. "Kathleen's Theme" is a pretty number that leads into a happy go lucky "Gus Gus". All in all, another keeper from the man McCann. The Gerald Wilson Orchestra certainly does a tasteful job, ably supporting Les' trio with tasteful strings and some great brass accents throughout. It's a very natural combination. This was released in 1965 and doesn't seem to be available, except in LP format on the used market. Unfortunately my copy is a bit used as well and you can expect to notice that you are indeed listening to vinyl. I apologize for that, did remove quite a bit of the clicking but wasn't happy with what "Click Repair" was doing, so I resorted to a manual treatment which leaves some artifacts. Someone else must have a cleaner copy out there but for now, this is certainly clean enough to enjoy. In fact, once you hear Les tickle those keys...it's Magnifique!!

This collaboration between LES McCANN and GERALD WILSON is a natural one and I think this album represents a highlight in Les' recording career. Les' playing here, as always, is positive and extroverted and is showcased wonderfully against the backdrop of Gerald's exciting band.

It occurred to me one night, several months ago, while I was watching Gerald Wilson and his orchestra during one of their engagements at The Lighthouse, that if Gerald had chosen the media of motion pictures to express himself rather than music, he would surely have become a great director in the tradition of Kramer, Preminger, or Stevens.

It should be known that I made this seemingly disjointed evaluation of Gerald during my seventh Cutty Sark at The Lighthouse. Often when I make such statements in this frame of mind they don't make a great deal of sense to me the following morning but the comparison between Gerald Wilson and great motion picture directors still seems valid to me.

A director must do many things well. The director assembles the cast, brings his ideas to a script that has been selected, and uses his artistic judgements with the script and the actors to best achieve the results he wants. When the product is ready for the public it has been the director who is most responsible for its success or failure.

Similarly, Gerald does all things well. He is a craftsman in every way. He hand-picks the musicians carefully (a glimpse at the personnel listing on this album will assure you that Gerald hasn't settled for second best), he selects the material (most of which he composes and arranges), and then he bolsters the band and the audience with his own enthusiasm and exuberance. Gerald is a total musician. He touches all bases, and like a good director he is the man in charge.

Although Gerald has paid his dues for many years, his reputation has become more widely known in the past few years. He played in the trumpet section of the great bands of Lunceford, Basie, Ellington, and Gillespie, arranged and composed, for all of these bands, and led his own successful big band in the 40's, but even with his great success he left it all behind to continue studying music. His self-imposed exile was ended when he formed a big band that was recorded by Pacific Jazz and released in 1961. ("YOU BETTER BELIEVE IT" PJ-34). Many were able to hear this exciting, fresh band for the first time.

Gerald's success has spread almost entirely word of mouth. Because of the economics of traveling across the country with a big band, Gerald's dates have been almost entirely restricted to California. Yet the news of Gerald's music spread rapidly after his first release and he soon became a best-selling artist in areas that had never seen him. Also Gerald has not had the television exposure that some of the older big bands have enjoyed, but a glance at the jazz polls shows him right at the top along with Basie, Ellington, and Herman (and with a sound that is the most modern of the big bands).

Watching Gerald's orchestra in performance is always a great pleasure for me because I'm watching a man who clearly enjoys what he's doing and loves his work. He seems to enjoy the musicians in his band as much as the audience and when one takes an excellent solo, Gerald sometimes leads the applause.

The success of Les McCann began as almost an underground movement. Les enjoyed a small but devoted following in Southern California and when his debut album was released on Pacific Jazz ("THE TRUTH" PJ-2) the support was just as loyal but the cult grew in numbers. His first album was an immediate success and Les has built a record of success that is almost unequalled among jazz musicians today.

An aspect of Les McCann that has often been overlooked is his compositional abilities. Les is the composer of all but one of the selections in this album.

"Bailor The Wailer" is an especially exuberant composition and performance. Les dedicates this to Elgin Baylor of the Los Angeles Lakers (who might be described as a hard-bop basketball player). And there's the beautiful "Kathleen's Theme" (arranged and conducted by Jimmie Haskell). "Could Be" has a good Basie feeling to it.

The arrangements with the big band on this album are by Gerald Wilson based on ideas by Les McCann.

Les is another man who is well known for doing many things well. This album is a testimony to his writing ability and his playing. It also showcases his regular trio (Victor Gaskin on bass, Paul Humphrey on drums) one of the most successful groups in jazz and constantly in demand around the world.

Like the two personalities involved in this record, "McCANN / WILSON" shouts with enthusiasm and exuberance. No hard sell is needed to convince you that you've just made an excellent choice in picking up this album. The names LES McCANN and GERALD WILSON speak for themselves. Listen.
-- Les Carter
KBCA Radio, Los Angeles 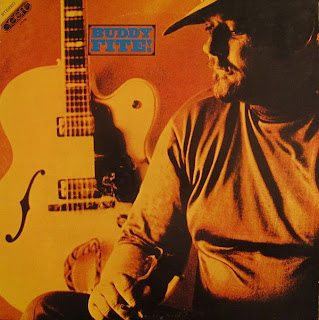 Nothing like a little comment activity to get a sleepy blog to show some signs of life, and tonight I'm happy to toast visitors with a Bud to cool and refresh your pop jazz guitar cravings. This is, I believe, the last of the original Buddy Fite recordings that was missing from this blog and I'm sorry it took me this long to get around to it, but here it is. There's not a lot to say this time around. My other four Fite posts pretty well express my great admiration for Buddy's work and frankly this album doesn't exactly enthrall me the way "Changes" did when I first discovered the intriguing guitar sound of the 6 foot, six-inch giant of the guitar. As I've stated before, though giant in stature and sound, Buddy Fite never really got the full treatment that might have more clearly revealed his skill and one-of-a-kind sensibilities. Unfortunately his recorded legacy is not only sadly very limited in quantity, but often presents varying quality in presentation as is again the case with this, his first album, "Buddy Fite!" from 1969. It presents a mixed bag of pop jazz that can dive pretty deep into the schmaltzy side, as on "Glad Rag Doll" where the saccharin muzak female chorus nearly makes you break out in laughter. But thankfully there's a healthy dose of what Buddy can really do throughout with special note to "Here's That Rainy Day", "Watch What Happens" and the lively "For Once In My Life" among others. The way he snaps the notes and chords and makes his guitar ring with emotion according to the tune, is once again signature Buddy, despite some of the creepy elevator production ploys. Once again, I'm just glad to add more to the Fite collection here on "Do You Hear What I Hear?" and some of these are keepers that could fit in with the "Changes" album that he put out the following year (1970). There were no credits offered on the album cover and frankly I don't much care who the singers were or the orchestra and strings that accompany most of this work. The focus is Buddy's sound and feel. Buddy passed away back in 2001 so enjoy what we've got here and maybe we'll dig up some more recordings somewhere...till then, this Buds for you....