Bluegrass On A Roll... 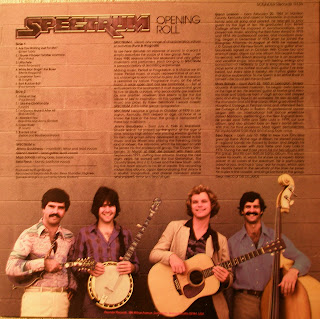 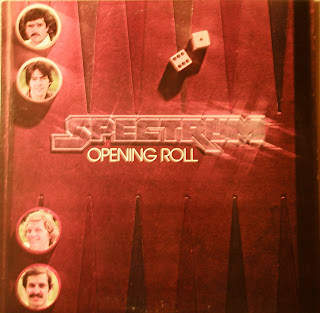 Here's an album I've wanted to dedicate to data for a long time and I can't believe I waited this long. But finally here it is. I saw these guys at least once or twice on the bluegrass circuit during the early eighties and owning two LP's, I've looked for CD's from this band ever since, but no luck. It seems that vinyl and cassettes were all they ever released and it's hard to believe Rounder hasn't done more with this band that included the likes of the great Jimmy Gaudreau on mandolin and Bela Fleck on banjo, not to mention Glenn Lawson on guitar and lead vocals. In actuality I would say this is not so great an album as it is a great lineup of musicians. I personally feel that the song selection could be stronger in some cases and I would like to hear more stretching out on the instrumental solos. Although there certainly are great bluegrass harmonies and tasty licks going on, most every song is only 2 to 3 minutes long, short but sweet I guess. But what really made this LP extra special to me is their rendition of an old favorite tune of mine, "Red Rubber Ball" (originally by Cyrkle). I love the song, always have and I think their version is outstanding, fast and tight, and just listen to the great interludes from Bela & Jimmy. Side two offers a similar speed grass blast in the form of the Everly's "Bye Bye Love", which I like nearly as much as "Red Rubber Ball". Otherwise, "I Like The Christian Life", "Are You Waiting Just For Me" and "Lonesome Town" are also strong cuts. The other tracks are fine but keep it from being an awesome album overall. The Cyrkle tune is really one of my very favorite all-time bluegrass recordings though not everyone may share my taste. Bottom line is that these guys were top notch musicians and performers and if you don't have some of their stuff...you should...now you do and you're on a roll!

great! I got this a while back from a newsgroup but it was over-cleaned to the point of being unlistenable. props to your 'mastering'!

It did have good scans though. Try these:

Yeah, it's not a perfect album and your point about song selection is true but I think I like it more than you do. Everything is done with such energy and precision and the cover versions of the Everly Bros etc. are nicely conceived. I was tickled to hear another version of "Little Pete". I've loved that one since I first heard it on Wheatstraw Suite by the Dillards. Thank you very much!

I seem to be a little late in reply to you Pirate, but thanks for the kudos and the jpeg's. And Kris, I appreciate your comments as well. As I said, the album isn't perfect, but few are and this one will always have enough great cuts to be among my favorites. Glad you enjoyed it!