A Guitarra lovers home is his Kessel... 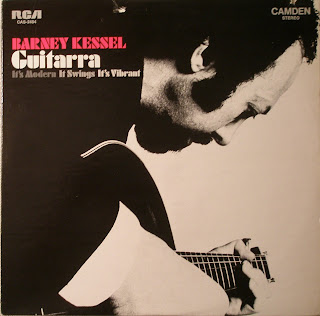 Well despite the desperate subject line here, there is something good to come of it, and that comes in the form of a 1969 album by Barney Kessel called "Guitarra". Barney Kessel was one of my early jazz guitar heroes largely by way of an 8-track recording of "The Poll Winners" and especially confirmed upon hearing his blazing work on a tune called "Nagasaki". Barney has pretty much made the grade with every recording of his I've heard since. This apparently little known LP is generally no exception, although I would have to say it's not my absolute favorite Barney recording. When confirming that this album is OOP I first thought I had identified it as an obscure recording called "Reflections In Rome" since, like "Guitarra" it was recorded in Rome in 1969 with what appears to be the same supporting cast of European artists. However, "Guitarra" has an entirely different collection of songs than what I found for the "Reflections..." album. Yet I could find no internet information on any album called "Guitarra". So, whether this is somehow one in the same as the other recording from Rome, or whether it is, as it seems, a second recording done the same year by the same musicians in the same location, it seems that either one is OOP and not easily found in the blogosphere. So here ya go, it's a fairly tame collection of relatively short tunes featuring Barney's "guitarra" and some pretty lively organ work from an Antonello Vannucchi. There's some samba and similar latinesque flavors here in keeping with the setting perhaps. Sometimes it strikes me as a little less than exciting but just as you think you might feel a little bit disappointed, Barney will come out with some fun Kessel-isms and reel you right back in to familiar ground...right back home with Barney and his guitarra...

Thank you for this treasure. Keep on your great work!

REALLY appreciate this little gem...bought it out of a cutout bin ca. 1974 but then gave it (and others) to a guitarist friend in lieu of rent one month in 1979...haven't seen it since. BLESS YOU!

I appreciate the comments and am glad this is enjoyed by others just as much as by me. This was a very clean record but it had some quality flaws I thought. Especially noticed high levels of music between tracks that had to be silenced out, but fortunately it came out decent enough. BTW, I've given up some recording for various reasons over the years, too. Never seems worth it in retrospect but what are ya gonna do?

the record is listed in a Kessel's discography published on 'Just Jazz Guitar' on sept.1997 as 'Kessel's Kit' recorded in Rome on 7,8 and 9 May 1969. Other musicians listed are Carlo Pes on guitar, Ciro Cicco on drums and tymp. Song list is the same, the number is RCA SF8098 but I don't know why the title is different. Reflections in Rome was recorded on the 7th of May 1969 (a busy day it seems!). Hope this info can be useful to you. Keep up the good work and 1.000.000 thanks for 'Seven string guitar' by Van Eps.

Thanks Fingerstyle! Very interesting and useful information. Good to know though the mystery remains in part. Glad you've enjoyed some of my posts and thanks for the comments!

Hello Arkiver
I just spoke with Antonello Vannucchi tonight. He barely remembers about that session and he doesn't have a copy of the lp so, if you like, I'm going to give him a copy on cd. He thanks you for that.
And I thank you for posting it, the record is a real pleasure to listen to!
All the best

I agree that the album is a pleasure as most any Kessel effort is so exciting to hear. Of course, your contact with Mr. Vannucchi is especially gratifying for me. Thank you for sharing this and I am so pleased to have helped bring this special recording full circle back to one of its original artists. Please convey my best wishes and kudos for his contributions to this recording we are all enjoying these many years later. Cheers.

Thanks for all the info above. Very interesting.

I have an original copy (vinyl) and the album is called Kessel's Kit.

Beautiful album. I started searching the internet for more info (which is insanely sparse for some reason) because I wanted to know more about Barney's guitar sound on the album.

If anyone know's what his set up was I'd appreciate being told as I'm planning on buying a new guitar soon and I'm after that warm, jazzy, acoustic almost nylon sounding guitar sound.

Picked this up on vinyl a few days ago. Your description of the music is pretty accurate - mostly mellow but with flashes of fire. Looks like it did come out on CD in 2006 (as "Kessel's Kit" although the cover looks identical), but the online asking price on Amazon for that is in the $30-40 range so I think we can safely say it's OOP.