Next at Bat in the continuing series... 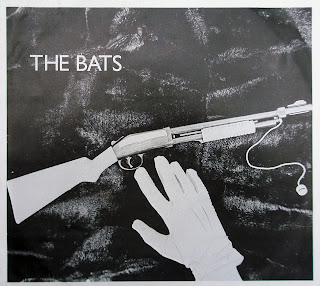 Next, but certainly not last, here we have yet another great Connecticut band called The Bats and this 45 captures two classic pop gems that have always had me hooked. Although I never saw The Bats live, these two recordings show a pretty slick group providing a highly professional and infectious rendering of their own classic "Popgun" along with a monster version of the Lennon/McCartney timeless hit song "Tell Me Why". To me these two recordings epitomize pop rock, 1980 or 1960 or 2009, no matter, this is just so rock solid and knee melting stuff. I know The Bats did put out a full album but it seems hard to believe they never went any further. The tune "Popgun" is incredible for pop lovers. It is simply credited to "BATT", perhaps the last 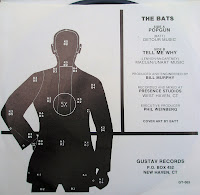 name of the group's leader I suppose. I know these cuts are available on the web elsewhere but this post must be made to praise these tremendous efforts from a top notch Connecticut group, taken directly from the 45 @ 320. Take aim and fire at this great stuff..."but the shot never kills"...

(side A)
Popgun (BATT) (Detour Music)