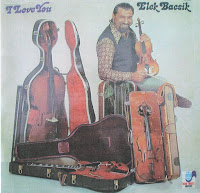 Back to guitars...Elek Bacsik was a very unique artist within the jazz realm and I had come to know this Hungarian born, cousin to Django Reinhardt no less, as a guitarist. Although I was vaguely aware that he was similarly known for talents on the violin, the instrument he started on apparently, I had become accustomed to his guitar and expected more of my favorite instrument featured on this LP, "I Love You", when I bought it. Well, such was not the case. It turns out that only one song of the eight on this album features Elek on electric guitar while all the others have him on violin or the violectra. So, once over the general disappointment, I can say that this long OOP album is a very worthwhile listen none-the-less. Like Elek's guitar style, his violin work is gritty and notably different within the traditional gypsy-ish jazz genre. This has Grapelli-like sounds but it isn't quite that either. He sounds like he is very loose and having fun. There's a certain careless quality that translates into an emotional feel and the list of accompanying musicians is very impressive on the Bob Theile Music recording. This is apparently the first American recording that Bacsik made and he didn't do much after this from what I can tell. He has a couple albums available on CD, it's all good, but I remain partial to the guitar as always. But I don't really have anything against violins...maybe just a little anarchy anyway....enjoy.
Love

this one is a gem...ashamed to admit i've never heard of him before. i love the ragged tone of the violin on this recording- but i love the guitar too...can't we all just get along? thanks for sharing this one! -rubby

yes, once I accepted violin favored over guitar, he's every bit as enjoyable and talented on either instrument. Like Toots Thielemans on guitar or harmonica. Thanks for the comment Rubby - cheers!

Here's his other jazz violin record
(lots of text on this page, but its there) Name of the record is
"Bird and Dizzy: A Musical Tribute"
enjoy
http://flying--dutchman.blogspot.com/2008/09/discography.html