Well here goes my first 70's pop-country-folk-rock album posting. As much as I profess my obsession with jazz, great musicianship, and some of the more outrageous reaches of the musical world (or universe for the sake of my fellow 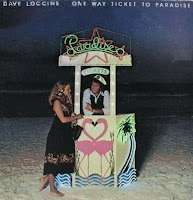 Arkestrans), the truth be known, I am also a lifelong

sucker for many other more mainstream and pop culture artifacts such as we have here. Now anyone that remembers the 70's as clearly as I do (well maybe those four years at UCONN weren't quite so clear) surely recalls Kenny Loggins of the very successful Loggins & Messina Band. Well, that's not the Loggins we have here. Although he is apparently Kenny's cousin, this Loggins is Dave Loggins and he had a pretty big hit of his own with "Please Come To Boston" back in those days. In fact, I went with the masses and openly admired that tune with Dave's expressive vocals ranging from deep to high so effortlessly, good lyrics, too, I thought at the time. So a few years later when I encountered a sad little cut-out 8-track tape by Dave Loggins for sale at a music store I quickly invested the buck or two to investigate and was soon glad I did. Although it did not include the big hit song I was so familiar with, it did offer a very well crafted concept work that I would suggest comes somewhere between Jonathon Edwards and Jimmy Buffet, maybe a touch of Jesse Colin Young. The songs are all decent I think, for the genre, some a bit stronger than others, but generally they keep to a pleasant island theme centered on a love interest, while maintaining a solid folk warmth with some pop-rock voicings that keep things a bit more interesting than the average faire. He does have a very unaffected voice in my opinion, it's sincere in feel and expression, and engaging along with some good lyrical content (though a couple songs arguably offer less than unique words). I remember listening to this on the old 8-track player in my '74 LTD (cop car deal is cool when you're 21) and my favorites were Goodbye Eyes (#1), Ship In A Bottle, Breeze, Please Remember Me, and the title song about Paradise. Once I lost track of the 8-track technology of yesteryear I searched faithfully for a CD of this album, but surprisingly it has never been re-released and remains hard to find, even on vinyl. I did finally snag this LP from e-Bay. Unfortunately there is a slight defect in the vinyl on the start of each side, but it's minimal. A few of the songs here are offered on a best of collection called The Good Side of Tomorrow: 1971-1984. As AllMusic notes there, Loggins can tend toward sounding similar from song to song, but overall he is a unique artist in his quality of voice and he interjects enough subtleties to each tune that I personally think he satisfies the listener for the length of an album like this one. If you enjoy these tracks I would recommend that you buy any of his other albums which are available on CD, including the fore mentioned collection which brings with it the big hit about hopeless love from Boston. But it really seems a shame that this album from 1977 has been neglected. Hopefully you will enjoy it like I have, although you may need a '74 LTD to fully appreciate the feeling that it holds...
Log In
Dave Loggins - One Way Ticket To Paradise - 1977
CBS/EPIC PE-34713