Not so uptown country music... 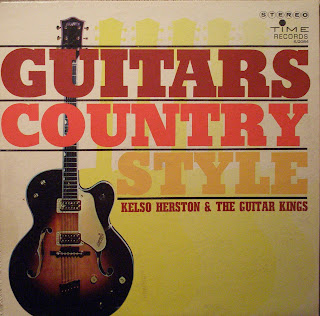 After my last post of Ray Edenton country guitar music, I had to follow up with this Kelso Herston album, with none other than his "Guitar Kings", which include the two guitar monsters, Mister Guitar "A" and Mr. Guitar "B". With all that suspense you can imagine that, similar to the Edenton country guitar album, this is no barn burner. You won't hear too much that resembles a scorchin' Junior Brown solo, but again, this is laid back solid pop country played by some real pros, and they get the simple point across in good old country style. Kelso was an outstanding studio / session player but also accomplished great things as a producer, among other things musical. There's not too much else to say. I can't nail down the date on this one but maybe someone out there can help me out on that. There's apparently a few recordings in this "series" of Guitar Kings sessions but details on them are pretty scarce as I searched the internet. I'm posting it just to satisfy folks out there that might share my passion for anything guitar and wonder what this somewhat obscure album sounds like. Listen for the moments, they are there, but don't hate me if you miss 'em! (share some comments!!)

Please can you reupload this record? Thank you