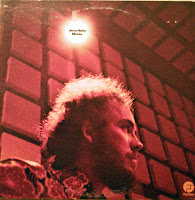 Music so often blends with moments in our lives. Maybe as obvious as seeing a band perform the music live, or maybe what was playing on the radio when you heard that Elvis died, or what you had on your stereo when you broke up with what's her name back in your teens. Certain songs and sounds recapture events and people as vividly as any photograph. I remember shortly after my father passed away that it struck me one evening that music just didn't have the same impact, it didn't conjure the same childlike happiness as it used to, and maybe I was right. But generally speaking, with time, music, like all feelings, rekindles and must remain a defining force, and I think I managed to get over it, though not as easily as I got over what's her name. So this leads me somehow to an album that I only listened to for the first time when I burned it not all that long ago. So go figure. It's a good one that features my favorite instrument, the guitar, played by someone who can really play it. Jerry Hahn is another under-recorded master and only a few recordings are available. This album, Moses, was never on CD to my knowledge is really enjoyable. It includes a lot of different techniques and some different feels on the electric guitar. Another 128kb offering from the LP, but it will give you a taste of some special music. Hopefully it will eventually equate to some special person or event in your life......BTW, Moses was the name of an English Mastiff that belonged to a good college friend of mine from New Jersey. He was a big lug, and a good dog, so was my friend...enjoy;

Wow!!!! I used to have this album - probably bought it around 1974-75. I also used to read and practice Jerry´s column in Guitar Player around that time. It´s lovely to hear again - thanks for posting.

My pleasure Richard, glad you enjoyed it. Unfortunately I didn't find it until much more recently but better late than never. I learned about Jerry through Gary Burton recordings and have admired him ever since. Wish there was more out there...

man, i am so happy to find this.
i learned "full moon and empty arms" 30 years ago from the transcription in Guitar Player mag, but this is the first time i've actually heard jerry hahn playing it.
thank you!
Rick

Great guitarist and this is a great album (I have the LP).

I've been looking for a copy of the only album by Jerry's fusion band, 'The Jerry Hahn Brotherhood.' If anyone sees one online, maybe they could post a link to it? Thanks - Felix (I have a Google account but forgot my password - next time)

Here's a direct link to the entire album of 'The Jerry Hahn Brotherhood'
http://www.megaupload.com/?d=P8XA6YQX

If you want to hear it first, all the tracks (except 1) are up on the blog I posted the link to the other day. Check out Jerry's version of the Ornette Coleman tune, Ramblin'. If you don't like wah-wah pedals, this is not the album for you. - Felix

Gentlemen, I'm old friends with jerry and have been recording him live since 1978. I have Moses and the Brotherhood albums super clear on CD and gave Jerry a copy to use as a master. I also have several live gigs posted on YouTube including Slick & Sharp. Just type in Jerry hahn and my name John Boda as well, enjoy.

Thanks for the references John. I think many of us would value more of Jerry's music if we can get it! Cheers.