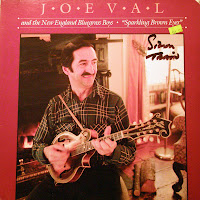 Like everything, variety is also the spice of music. Even when you think you just can't get excited about a certain style or genre, all of a sudden, given the opportunity, you find yourself listening to something that just breaks through. Then you are energized to find out what else there is like it which leads to more stuff that isn't exactly like it which leads to more stuff that isn't anything like it and whammo, back you are to another total surprise discovery. Most of my childhood experience with music was guided by the radio and television and an occasional school play or other musical production. I evolved to the early 70's well entrenched in the popular rock and folk of the day, probably most admiring the likes of James Taylor and Steve Miller, some of which remain old reliables in the CD collection. But my musical epiphany really started with a good friend, one with an already broader range of musical exposure. He played Herbie Hancock's Headhunter album. I knew he was into jazz and I occasionally listened but found much of it difficult to relate to, a difficult segue from The Rolling Stones. I'm not sure which song sealed the deal, Chameleon I think, but with that Hancock album I was soon finding it hard to keep still to that funky good stuff and the fun improvisations that framed it. My first response was to question that this could be considered jazz, in the same realm as Ella & Coltrane where I had failed to truly relate. But more listens to a few more items carefully selected from my buddy's budding collection and you just don't turn back, do you? So Jazz was my first real breakthrough and probably remains my first obsession, but pretty much everything followed in the years to come, in pretty quick succession; Blues, Bluegrass, Celtic, Classical, Honky Tonk, Reggae, and all the subfiles there of. So while I will say that Sun Ra remains one of the most highly revered among my favorite musicians, there is plenty of other good stuff to talk about and share. In trying to keep with only material that seems totally out of print and unavailable, I am suggesting this second post of Joe Val and the New England Bluegrass Boys as a great example of the heart of Bluegrass and music in general. Joe sings such free flying lead and harmony parts with great sincerity. I always enjoy a certain carefree feel in his mandolin playing as well. "Sparkling Brown Eyes" may not be his best album, but it's hard to pick from the few he has out there, and this one is not available on CD. Not sure why he's been avoided so. Sorry this is another 128kb as one of my early recordings but Joe doesn't need too much hi-fi treatment, just a mandolin and some bluegrass boys!! Enjoy;