In Bob We Strut 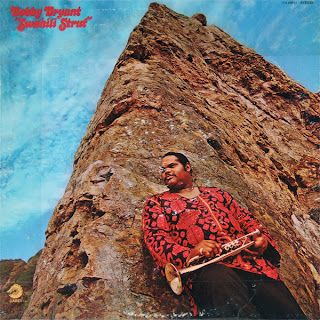 Here's an early seventies album that seems to be generally MIA and upon my recent reintro-duction I'm all too happy to get it out there where it belongs. I know very little about Bobby Bryant. I see that at least one or two other LP's from Mr. Bryant are out there, but this one, which appears to be his last as a leader according to AllMusic, seems plenty worthy of joining the living. First I must say that of the seven tracks, I think the title track is perhaps the weakest. Enjoyable, somewhat funkified jazz with solid instrumentation, but not much feeling. Easy to dance to. But from there I think the rest is really solid to excellent with some impressive playing in a near big band sort of sound. "A Prayer For Peace" brings some prettier sounds and you start to hear Bobby's chops only to be followed by a beautiful interpretation of Horace Silver's "Peace". Side 2 is full of more great playing from Bobby and his supporting cast. Kriss Kross is pretty heavy stuff, and then a great surprise with "We've Only Just Begun". This Paul Williams/Carpenters tune wound up coming off beautifully with a sweet intro that breaks into a very happening workout including some clever soloing while keeping the tune intact. Another highlight of the album is John Klemmer's "The Beauty of Her Soul". This again features the sensitivity of the musicians to flow in and out of the light and airy butterfly sounds into the classic Klemmer thunder. The album closes with a more worthy "strut" in Bobby's own "Nite Crawler". Funky and full of big sounds including a long guitar workout from David T. Walker (I believe, although Arthur Adams is on board also). All in all I have to say that this is a very soulful album that successfully captures a variety of musical moods. While the "strut" is definitely in evidence, there is much more going on here. I like the mini-big band flavor and was impressed with the solo efforts coming out from all the players. Some of it borders on getting pretty loose while some captures more of a late sixties Blue Note sound. Either way it's really good, strut me...

"The Beauty of Her Soul" arranged & conducted by John Klemmer
Posted by Durge & The Oldies at 11:24 PM

Great blog - thanks for all the music!

I have been a Bobby Bryant fan since playing trumpet with him in 1970 & 71. I am looking for a decent transcription of his Big Band Blues album. If you come across one, please let us know.

I will do that. I hope I do run into more of Bobby's work.