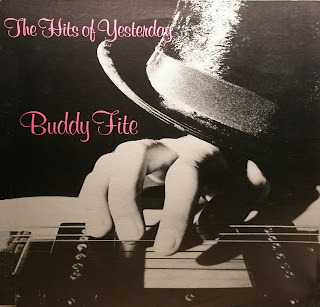 Yes, here is yet another Buddy Fite posting, a guitarist with very few recordings but a great sound. I've become a bit focused on collecting all of his meager number of LP's so I had to find this album, even though I knew that 6 of the 9 tracks were repeats of tracks from other albums. As noted earlier on this site, from what I can tell, Buddy only has six LP's as a leader, and of those, only one, "Buddy Fite & Friend", is free of any repeat tracks. So I went ahead and ripped the whole album here, even though only three tracks appear to be unique. Right off the bat I was shocked to hear a vocalist anchoring the first tune, "I Feel The Earth Move". I will say that the singer here does a nice job with earthy, David Clayton Thomas type vocals over a nice bluesy/jazz combo setting where Buddy takes a one minute solo in the middle. Nice enough and definitely different from anything I've heard on any of his other albums, but I have to say I was disappointed to hear something that didn't just feature Buddy throughout. With so few recordings to enjoy, I just want to hear the man play his guitar. Moving into the next few tracks on side one we get back to featuring Buddy, but this whole side is pretty different too in that it concentrates on the bluesy side of Buddy. Each of these three songs offers a different accompanist soloing on saxophone, flute and finally a nice organ over spirited scatting. All very nicely done, all very much in a combo setting, but unfortunately there is no mention of the personnel on the cover. In fact, the recording itself is noticeably of relative poor quality with inconsistencies in the integrity of the sound, volume variations at a few moments, etc. Not terrible, but I guess there's a reason why this seems to be the scarcest of the Fite LP's. Then again, as always, there really is some "tasty" guitar playing throughout. Side 2 opens with what made me completely satisfied that I sprung for a considerable sum to acquire this piece of vinyl. The tune is "Love's Been Good To Me" and Buddy's treatment is creative, unique and very pretty. Along with the opening song on side 1 and Satin Doll, this makes up the three unique tunes for this album. Satin Doll is also very nicely done in an up tempo mode. So for anyone else that has become enamored with Buddy's bright and masterful craft work, I hope you'll enjoy this small dose of new material.While each is indeed a hit with me to varying degrees, it just hurts that only three cuts are additive to the collection. But as hoped, the hits outweigh the hurts mightily...enjoy!

Thank you very much!

UR welcome very much. Considering what I had to pay to procure this scarce record, it is gratifying to see somebody out there will enjoy it besides just me! Thanks for the comment KK.

Just a quick word to let you know that you are featured in our blogroll on Radio.Video.Jazz

Please check our site. If you like our work, do link back to us.

A lot of thanks.

Oh wow! I stumbled upon your blog from my buddy's blog: Open Source Beer. This album is just so smooth. Perfect with a drink of whiskey, in my opinion. I am going to check out Bobby Bryant now since you describe it as jazzy funk or funky jazz and I love it. Thank you so much. And may I recommend Super Session although I am sure you already have it: http://www.amazon.com/Super-Session/dp/B00138KHAQ/ref=sr_1_1?ie=UTF8&qid=1303199078&sr=8-1

Hello
I have Les McCann Sings album, if you are interested contact me on my mail:
RicsiBelan@gmail.com

I had not searched Buddy's name for some time and found this. Thanks. I do have some old music Cassettes of his. I wish I could have them on CD. Buddy was my Father and to hear his music is comforting for me, as I miss him so much. Thanks for this walk back in a time when he was still with us. Deborah

Hi Deborah! I'm very honored that you visited this little blog where your father is so genuinely revered and enjoyed. I consider Buddy among the top 2 or 3 artists that I most enthusiastically promote because of the obviously inadequate attention and credit they receive. Buddy may be #1 among that number in my mind. He was a uniquely gifted musician but unfortunately the masses don't always get attracted to someone who's a little different. Plus, much of his unique quality could easily be lost on many listeners and his general sound might appear more benign than it ever should. That certainly is too bad for the many, but I have tried in my small way to spread the word and vibe on Buddy Fite. Now I can't overlook your comment about the cassette recordings you have. Assuming these are tracks that have not been committed to vinyl in the past, then that is tremendously exciting to hear and we don't want to let them become lost forever. For an artist of Buddy's greatness any recordings like that should be handled with the highest professional quality, something I'm not particularly versed in. But I would think some recording company would be interested in doing justice to what you have. I'll tell you this, if you are not motivated or able to pursue it yourself, I would be thrilled to help in any way I can, please just contact me if you are so inclined to trust me to do so at any level. I would not want any monetary part of it, that would be for you, his family, but I would consider it a musical highlight of my life, honestly. Thanks again for visiting and I hope you will follow up and let me know what you decide to do with the cassette recordings. BTW, I've read a few things about Buddy, what little I could find, and I can see why you would miss him, but you're not alone in loving to hear his music.

I'm looking for a Buddy Fite recording of On the Street Where You Live" about 1980 or so. Can you direct me to anything he has done that might be on CD?
Michael Near
manear@earthlink.net
818-415-4472

Any chance of uploading his first album? My copy is terrible and smells of cat pee (True!) Transferred it to CD but the record had skips I had to push past. Was barely playable.

...and THANKS for promoting such a talented player.

My pleasure Gimme! Glad you agree. As for his first album, you'll have to tell me exactly which album you mean. I think I've posted all my Fite albums here already but maybe I missed one?

I am Buddy Fite's stepson. The album Buddy Fite and Friend's was out takes from a two week LA trip he took where he played for Johnny Mathis on the Merv Griffin and Johnny Carson show and recorded three albums. Buddy Fite and Friends he didn't even know about until I bought it in a record store and showed it to him. I lived with Bud from 1960-70 and saw him all the time until his death. LA use and abused him, producing and selling a record he didn't even know about....and would not have allowed to be released.

Hi Chris and thanks for the background on one of my favorite artists (as you can probably tell). It seems I've heard from several family members now and I appreciate the personal insights, although this bit of history doesn't sound so good for Buddy. Not so surprising I guess, but sorry to hear it just the same. While I can understand that he may not have thought much of it himself, you also have to understand that those of us that just love his sound/tone/touch so much, we're often just happy for any work he did, even if it isn't completely representative. With so little of his work recorded for us to enjoy, we'll grab at these straws I guess. Please feel free to share any additional insights you would like, I'm always interested in knowing more about the great Buddy Fite! Thanks Chris.

This one! Sorry it took so long to respond. I got pushed out of my house with Hurricane Sandy.

Well, it took me a long time to get around to it too Gimme, but thanks to your reminder I got this recorded tonight and have just posted that original Fite recording from 1969. Hope you like it!

You rule!! Did you ever get the cassettes from Deborah?

I'm afraid I never did hear back from Deborah. Would love to...