Wilkins It For All It's Worth... 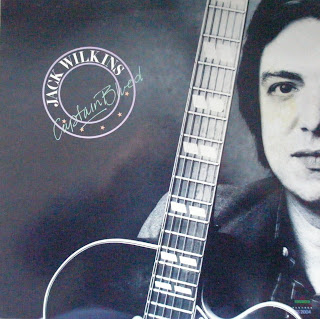 Alright, that subject header is a bad pun and doesn't make a whole lot of sense but then one could say, when it comes to guitar playing, Jack Wilkins really does it for all it's worth. Foregoing my usual diatribe here, I will get to the point; Wilkins can flat out play. Ever since I heard a cut off of his album Merge, back in the early 80's, I knew he was a keeper. Unfortunately there is far too little of his work out there. You don't see him that often as a side man and he only has a handful of albums to his name. But what's there is generally great, just as you will hear in this album, "Captain Blued". This is a curious recording in that I can find very little evidence that it was ever made! It's produced by Creed Taylor on the Greenstreet Record label and it includes the accompaniment of one of the best alto sax guys you could want, the great veteran Phil Woods, along with other familiar names like Harvie Swartz on bass. Yet there is little mention of this recording anywhere. Doesn't appear to be available these days, so I felt it my duty to let folks hear what they might be missing. Some of these songs, like "Captain Blued" and "Mexico", were also recorded (different versions I believe) on other albums so you should be able to find some of that out there to buy on CD. This particular LP is definitely another winner for Wilkins. Not only is his work effortless, creative and inspiring, but the tunes are all enjoyable and nicely arranged. Add to that the wonderful voicings from Mr. Woods and great contributions from all the other supporting cast (with a good deal of solo work for all) and I will predict that you will be glad you gave this a listen. Although this is all generally straight ahead jazz, you will find diversity in the moods and stylings here. Many exciting moments to enjoy. It should make you want to hear more of this master guitarist and he does have a site that offers listens and downloads from many of his other albums, including a bunch of live gig cuts. So I hope you will agree that this guy is the cream of the crop, and cream leads to milk, and there I go milkin' it for all it's worth...

Thanks, never heard of this Wilkins' album. His first album, 'Windows' (also never released on CD) is excellent. It can be found on the Net, downloaded it from a blog (don't recall when/where). - Felix

Yes, Windows is often considered his best work though it's hard to pick from all his great recordings. I have a copy that is among my favorite guitar albums. Thanks for the good word Felix and hope you enjoy this relatively lesser known album.