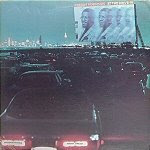 Well there aren't many of these left around these days, drive-in movies that is. If you're over 40 years old you should have a fair recollection of that special experience that collected hundreds of people, in their cars, in a big old paved lot to watch one giant screen once the sun let down it's glowing curtain. Kids would run through the maze of cars and gather in special play areas where there were often swings and "dizzy-go-rounds", monkey bars and assorted other items of liability. Teenagers would hang out in their cars, free of adult supervision and do what teenagers want to do when unsupervised. Adults would settle in for an evening of popcorn, hot dogs and hamburgers (the ones that didn't actually dance and party), soda pops (some of them could dance too) and a relatively inexpensive night out to entertain the family. I remember seeing "Hard Day's Night" starring The Beatles as a particularly standout drive-in experience but there were countless others including my own teenage adventures for the likes of "Mandingo", all complete with that clumsy hunk of metal precariously dangled from the top of one of the windows (which you may have had to keep pretty well closed to keep out mosquitoes) that kept your car anchored at its post. And which post did you choose? Ahhh, the ambling about the lot looking for the best available space. Something with a decent view of the screen, not too close, not too far, decent proximity to the bathrooms and snack bar, consider the neighboring cars and the potential anxieties as you quickly profile the occupants of each. It was normal practice to explore several potential spots before settling on a final destination. Then you just had to hope the damn speaker box you got would work. Some didn't work at all, some had bags over them (out of order) and some were crackly or didn't have enough volume. All of them sounded pretty lousy but that was part of the charm I suppose. And that brings us to something that sounds pretty darn good, Mr. Freddy Robinson. As my original music post on this blog was my most coveted Freddy album, this one, "At The Drive-In ", is not quite so scarce, but it again features some fine guitar work and more of Freddy's distinctive vocals, as well. What drove me crazy here was that this is not a particularly pristine copy of the album. I bought it as a NM but it is more a VG at best. I had to do a lot of click removal and there is still a share of crackle here and there but I wouldn't post it if it were really bad so I think it is a passable version until a better one comes along. There must be other postings out there but I haven't come across one. Actually I see where a few of these tracks appear on a recent, long overdue, collection of Freddy's work called "Bluesology". I am looking to buy that as it includes quite a few never before released tracks, and i recommend you do the same. But if you want a good sample of what Freddy does with his unique mix of R&B and jazz, then check out this OOP recording from 1972 and I think you'll enjoy it, despite the less than perfect quality here. Taken from the LP at 320kbps , hopefully it will be drive-in' you crazy too, in a good way....

Just a quick word to let you know that you are featured in the Digger's Corner section of our Radio.Jazz.Club blogroll

Also, we sure would appreciate to be featured in your blogroll.

Find more Freddy Robinson in my mp3blog and forum searches:
HERE
and
HERE

FINALLY had some free time to give this a spin...WOAH, it's all killer, no filler, thank you for these soulfull,jazzy & blue music!
BIG smile over here, wonderful...
One of the BEST Robinson's I've came across. ExXxcellent.
peace, E-mile

Glad you enjoyed it E-mile, though I shouldn't be surprised. It isn't easy to distinguish yourself as a jazz/blues/R&B performer like Freddy seems to always manage to do. I really enjoy his vocals too. Peace back my friend!

Try it again and you should find the new link functional. Thanks for letting me know!:)

thanx for re-upping, but the first few seconds of the first song is missing :(

Yeah, that was just one of many defects in the vinyl I bought. As I mentioned in my post, this did "drive me crazy". It took a lot of effort just to get this quality and unfortunately, the very first second of the very first song has a slight dimple that I could not get to play through. So it does begin rather abruptly but it is only a split second. Overall you will find this is a pretty poor quality recording but I did the best I could with my resources. I think it still manages to deliver the goods until a better copy is available, or better yet, a CD release of this great stuff.

Thanks for the share Arkiver. I downloaded 'The Coming Atlantis' today as well, and I'm just getting educated about Freddie... great music!

Thanks, The Funky Goat

i am writing to ask you for an invite please?

Not sure I understand...invited to what? You're already here.

thank you so much