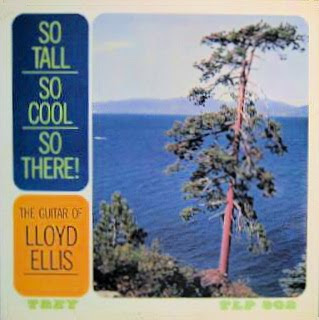 Well, it's been a tragically long hiatus but at least I'm happy to come back with this particular, long awaited post. This album is one that I've been searching for over the past couple of years since I first saw references to its curious cover art and its well respected, though under recorded, artist, one Lloyd Ellis. Most of us jazz guitar geeks are quite familiar with his other album that proclaims his prowess as the world's fastest guitarist! And so we are anxious for any other examples of his work. In the genre of the venerable Hank Garland and Chet Atkins and other fine country pickers who evolved into impeccable jazz musicians, I knew this other album existed and am glad to finally find it. The recording quality here is not so great but for the moment I will consider this much better than the former MIA status. After enjoying the 12 tunes on this album for the first time, I will say it doesn't disappoint. There isn't much to point out as off the charts, just a very solid, enjoyable listen to some jazz standards delivered with clear and spirited guitar mastery. Some of the tunes are perhaps not the most exciting, mostly brief and familiar. But Ellis brings a real sense of confidence and joy to the recording, and you do occasionally pick up on his country roots which is a nice nuance to me. Certainly you have to remark on his agility and clarity, ripping off some lively lines and licks that just ring without a doubt. Pretty impressive. But before you go, just take a good look at this album cover. His other, better known album, seems odd in that the cover proclaims this respectable jazz artist to be such a speedy rock star type champion of the guitar. That always seemed sort of out of place for a traditional jazz guitar rendering. Now you look at this album and it kind of goes the other way with this Minnesota-like lakefront scene contrasted with the "hip" album title, "So Tall, So Cool, So There". Who thought this up? It really added to the intrigue of tracking this recording down, and now I can remove it from the "Does anyone have this record" list. I think you will enjoy the discovery as well. I might dispute just how "tall" this album is, but it is clearly, so cool, and so there.....so there.

Nice, verrrry nice! Never mind the gap
I guess I hear what YOU hear, though I'm not a guitar-afinado myself [:-)
Good to hear you back with this splendid post my friend, hope you're being "sparse" , you're posting won't keep you from, well all the goodies you share here... excuse my english...
Looking forward to your next treat m8!
peace,E-mile

Thanks for the good word E-mile. I'll have to let you know how I collected this last recording some time. Meanwhile, I do hope to get back to the vinyl more often now. There's always something hiding in there...

Thank you Arkiver for this. Additional information on th eLP:

Thanks for the info Jazzy, I will update the post!

Hey Arkiver - glad I found you. Thanks for making a comeback.

Never heard of this guy, but the involvement of Lee Hazlewood sparks my curiosity. Thanks for this rarity!

Mr. Ellis is new to me - just noticed his "Fastest Guitar..." Lp listed on a Carlton Records sleeve for the Bill Gannon 3 Lp (featuring drummer Larry Hovis, actor from Hogan's Hero's no less...)

I enjoy to read your presentations. Thank you for this post.

Hello,
I am Lloyd Ellis's step-daughter and have bio info if you like. I produced a documentary "I Just Wanted to Play" DVD.
There are 4 clips from that DVD on Youtube.com. Nice to see the positive reviews.
Sincerely, Kristina
rubytoo1@gmail.com