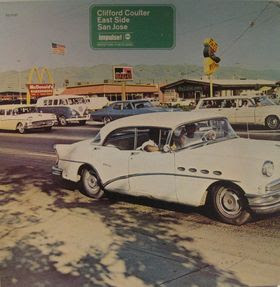 Well, long time no see. Too busy seeing all the other great blogs out there to find time for my own. But this album struck me recently as due some exposure. This is the 1970 Soul/Jazz creation of Clifford Coulter. According to our friends at allmusic.com this album, "East Side San Jose", was Clifford's first recording as a leader though another followed in 1971 when both were apparently released. I vaguely recall when I first rescued this from a bargain bin of vinyl that I was a little disappointed with my first listen. I'm not sure I listened to it again in the 30-ish years since! I expect it was probably because I generally wanted little to do with anything in the jazz category that brought with it vocals unless it was Lady "Day" or Eddie Jefferson. Now, so many years wiser, I must say that this is a very enjoyable album for what it is. Cliff delivers some real nice vocals on the first song on each side of the record, "Do It Again" & "Sal Si Puedes". He also does a fine job bringing it on the keyboards throughout this session. All the cuts are at least solid if not excellent, mostly groovin' and funkified with some signature guitar work from one of my favorite jazz/blues men, Mel Brown. Mel offers some chicken pickin' and wah-wah magic that keeps this thing moving and finishing all too soon. The brass and rhythm sections are also tight and mix in perfectly with Cliff & Mel. I picked up a slight "phantom" background sound at times on this LP, sometimes sounds like an intended overdub, sometimes not so much, but if you're just going with the flow you don't even notice it, very faint. My copy has a little crackle here and there but it came out fine I think, you should enjoy it if you like a fun jam session of west coast soul oriented jazz, including some bluesy and expressive singing from Cliff. If you're like me, this should lead to your enrollment in the Coulter Club...

(all songs written by Clifford Coulter)

Arkiver, I'm glad you thought this was "due some exposure"...totally new to me and it's great to hear Mel Brown struttin' his stuff!!!
huge thanks for sharing this true gem. peace, E-mile

E-mile, always a pleasure and a minor miracle to find anything new to you! So glad you enjoyed it.

Many thanks for this Impulse rarity!

unfortunately rapidshare is a bit of a drag, and I cannot download this. Any alternative avenue?

Sorry you are having problems. Can you clarify the problem. I checked the link and it works fine for me and there is no problem on RS from what I can see. Please let me know and I will try to help. Many others are downloading this successfully from what I can see.

Had not heard this artist before.

I ran everything through Click Repair and it sounds fine.

Thank you. I have search this one for a long time. Regards.

Apparently you are not alone. Quite a few downloads from this one, the fastest I've seen on this blog so far. I'm so glad there was such an interest and thanks for leaving your comment!

What a discovery. Although I prefer the old method of diggin the bins to find gems I'm glad you shared this one.

This is a wonderful album. So old and rare. For a loooong time this was available NOWHERE on the Internet. I bought a copy of this record (still sealed, till I tore it open!!!) and love playing it. Now I guess I don't need to take the trouble to rip it. Hats off to you sir. Thank you for this, one helluva share :o) G, Manchester UK

Artwork, if anyone's interested.. Still buzzing from finding this album!!!

Thanks for the thanks "G", and nice to have the extra artwork, too. I generally don't go past the JPEG shown in my posts when it comes to artwork because I only use them for i-Pod purposes. Higher resolution just isn't an issue but I know some folks care so thank you!
I must say that I didn't realize how much of a hit this RIP would be and now I'm so glad I decided to do it. Sometimes you take certain things for granted and I just didn't fully appreciate this old gem as much as I should have. Good stuff...

I just donated 575 LPs to Goodwill today, but kept this one. Why? Forty years later, the cover photo reminds me of East Side San Jose in Costa Rica as it looks today. Uncanny.

That's a lot of donating, and quite a testament to Mr. Coulter! Just where is this Goodwill? :)

Sign me up for the Coulter Club, Oh Ya I'm already a member by default:-) I'm Jammin to Pop's music at work right now as a matter of fact!
Peace,
Monica Coulter-Warren

Hi guys,
thanks for sharing this unique album. I'm still having problems for finding the artist's album entitled "do it now". It supposed to be released by impulse records.
If anyone has the links, please do not hesitate to share :). i'll be very pleased.

With a track called "Big fat funky Shirley" I have to nail it.

Sometimes it's just that simple...:)

Thanks for this site. The commenter at this site who said he donated 500 LP's to Goodwill but kept "East Side San Jose" had it right. In the late 1960's, Abe "Voco" Keshkarian, the dean of the underground FM radio DJ's in San Franciso at KSAN, played two cuts from this great LP. Repeatedly, like every night for two weeks: "Do It Again" and Prayer Garden." You can fi8nd the former on YouTube. Unbelievably moving lyric and music. But the instrumental Prayer Garden is unavailable - I search for it online every year, this transcendentally great piece of sacred music. It belong up there with Yuseef's version of Come Sunday (widely available) and another unavailable late 60's instrumental cut called Church by McKinley Jackson and Politicians, a group of Motown studio musicians that cut a single wonderful LP. (Look for Politicians at YouTube for a couple find cuts from that L.P.)

you misspelled my grandfathers name.... its COULTER

Thank you for pointing out my numerous typos and my apologies to Clifford and you. I've corrected the places where the name was misspelled and I've also renewed the link. Great music!