Off To Hear The Wizard... 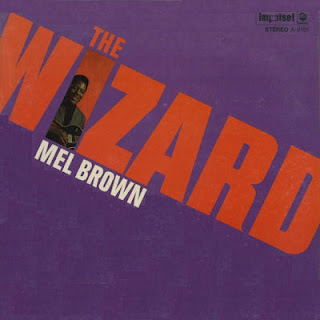 I haven't had much time to rip LP's the last few weeks but today I was listening to a CD I created from another one of those embarrass- ing 8-track tapes a few years back. At the time I never anticipated posting some of these rips on a blog so I listened with a discriminating ear for imperfections, track breaks, or any qualitative issues that might make me feel unhappy with posting this classic 60's blues rocker instrumental gem from Mel Brown. Eight songs later I decided it was worthy of a post until a better version comes along. With the apparent popularity of Mel Brown's 60's & 70's work I am very surprised that this album seems so hard to find. It has never been committed to commercial CD, long OOP, but with all the recognition this gritty guitarist seems to have, this LP seems unusually scarce. So I decided to add it to this blog until someone can identify a better source. I have the Chicken Fat CD and all Mel's other albums, and I think this one is easily as good or better than any of the others. It's pretty straight forward, simple and pretty raw R&B with tight horns and groovin' support throughout. There are no significant vocals, just a torent of funkified blues guitar licks firing from start to finish. This reminds me somewhat of Freddy King's "Hide Away", which is an all-time favorite. I think this is up there. Keep in mind that this was taken from the lowly 8-track tape so the order of the songs reflects what was committed to that idiom. From what I hear, they were able to divvy things up so as to avoid track change interruptions, a good thing that is greatly appreciated by those of us old school music desperados that committed so many hours of listening to this ill-fated medium. This album starts out with a lively and crisp rendering of "Ode To Billie Joe" and then just sails through one rock-blues workout after another. It's fun, it's infectious, and a great time capsule for the late 60's somewhere between Memphis and Detroit, but you're definitely not in Kansas anymore Dorothy...enjoy!