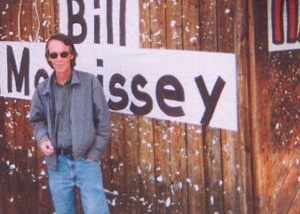 I haven't taken to posting YouTube stuff or any kind of videos and God knows that plenty of hugely important artists have come and gone during the few short years that this blog has been around. But a couple weeks ago I learned of the passing of Bill Morrissey, a song writer and singer that touched the folk music community and probably beyond, and one that has left more than a handful of what I will call breath taking moments. Poetry that hits home and tunes that drive into your deepest insides. Songs that will make you stop everything you're doing when you hear them. How sad to lose that artistry, that musical companion, so young (60 years old). Many people are quick to describe Bill's work as sad and depressing and although they usually mean it in a complimentary way, I don't think it quite does justice to how Bill Morrissey captured the elements of life, and when powerful words and feelings hit you just right, it's easy to say it's sad. For me, it's just right. It's what life is that flows through his lyrics and sounds. It's thoughtful, sensitive and full of irony and humor, the things that memories are made of, the things that freeze time, that take you back until you are no more, and you feel like the spirit rather than the vessel. So here I have posted a video someone has on YouTube, a song that is so Bill Morrissey and so much one of my go to songs when I need to get perspective. Somehow it always manages to leave me looking up and set for good things. I don't know how Bill does that but for me he does. And to do complete justice to this great song and the memory of the man who wrote it, I also offer the following lyrics that I deciphered on my own (so please let me know if you see any mistakes). I am very grateful for the legacy this man left behind and how he has enriched my life.


These Cold Fingers by Bill Morrissey
Gina left town with the, first snow of the year
He drove her to the airport in his Ford.
And he, tried to propose as he ordered one more beer,
But the P-A drowned his words, and it was time for her to board.
So he walked her to the gate, he took his hat off as he kissed her,
He needed one more drink to take the chill out of his soul.
He said a quick goodbye, then spent two hours in the bar,
Finally paid his tab and kept a dollar for the toll.
(chorus)
Everything slips, through these cold fingers
Like trying to hold water, trying to hold sand,
Close your eyes, make a wish, and listen to the singer,
One more round bartender, pour a double if you can.
It’s 4 o’clock, and the sun’s gone down the drain,
It’s still late winter, but they say it’s early spring.
Lewis reads the gas pumps, Rossi counts the oils,
But me I’m done, so punch the clock and see you in the morning.
There’s nothin’ back at home that ain’t gone greasy with the stove,
I never laughed so hard as when that typewriter broke.
Think I’ll stop along the River Road for a half pint and some beer,
Well everything would be okay if these old dreams would disappear.
(chorus)
The dog can’t move no more, surprised he made it till the spring,
His pain won’t go away, and the pills don’t do a thing.
You’ve known that old hound longer, than you’ve known most of your friends,
And no matter how you let him down, he’d always take you back again
So it’s one tall glass of whiskey, one last drink for old time’s sake,
The dog just lays in bed, and watches every move you make.
Wrap him in his blanket, hold him once more close to you,
Lead him out behind the barn with a borrowed 22.
(chorus)
Posted by Durge & The Oldies at 4:22 PM

Thanks Annexsie. I see that your comment relates to a different post on this blog, the one for October Days and I appreciate the additional detail on Blake Nelson. The link was interesting to see. An author I see. Would like to know what became of his musical efforts, if anything.

that song would probably be my nominee for the saddest song ever written- i can't even read a verse without feeling the tears coming on...
he was a truly gifted writer of prose and songs, as well as a gentle and generous performer.
d

I sure agree with you Dugg. That song goes on my all time list of great songs that pull the heart strings. He seems to have lived his songs which somehow works to make them hit home so well. You can feel that this is not imagined emotion or circumstance. One of those songs that just calms you down and makes you get real quiet, and I need that once in a while. Nobody better than Bill was.

I'm in the process of ripping my old cds onto a huge external hard drive, and I'm up to Bill's. I, of course, can not listen to them without tearing up, which as you say is a very good thing. My wife and I first saw Bill in Cambridge many years ago, right after Standing Eight came out (he shared the stage with Steven Wright that evening), and we enjoyed him in person many times since - Passim's, down on the Vineyard, and even Border's in Peabody/Danvers. Always a wonderful guy, and yes, he is missed.

I wish I had seen Bill when I had the chance. Sadly I missed out. Still, his music is so powerful that I often feel like I have seen him in person, up close and personal. Thanks for sharing Dennis.